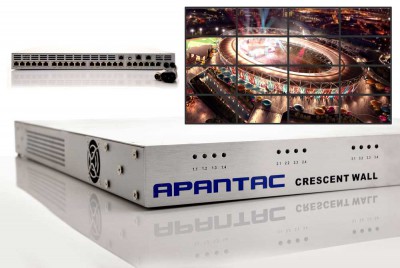 Apantac, provider of cost-effective multiviewers, video walls, extenders, and signal processing solutions has expanded its CRESCENT Series of Video Walls and will demonstrate the new models at the upcoming Integrated Systems Europe 2014.

The concept of a video wall is to maximize and enrich the visual impact of the video signal being displayed. These solutions give you the option to display a single video signal across several monitors. This cost effective configurable display solution is ideal for digital signage, corporate, government, a vast range of broadcast environments including the live video backdrop in a studio, as well as any professional audio visual system installation that requires a video wall platform.

The newest configurations to the CRESCENT Video Wall Series are:

The video walls output resolution can be set for 1920x1080P or 1366x768P and they accept 720P, 1080i or 1080P source signals. The hardware is a compact ½ rack unit or 1 RU chassis size, and includes a built-in extender per every output for extending the DVI/HDMI video signals over CAT 6 cable.

The built-in CATx extenders allow the source to be up to 35 meters (115 feet) from video wall hardware.

The CRESCENT Video Wall series is a natural evolution based on the Apantac’s image processing technology that has placed Apantac as a market leader in the Multiviewer industry.